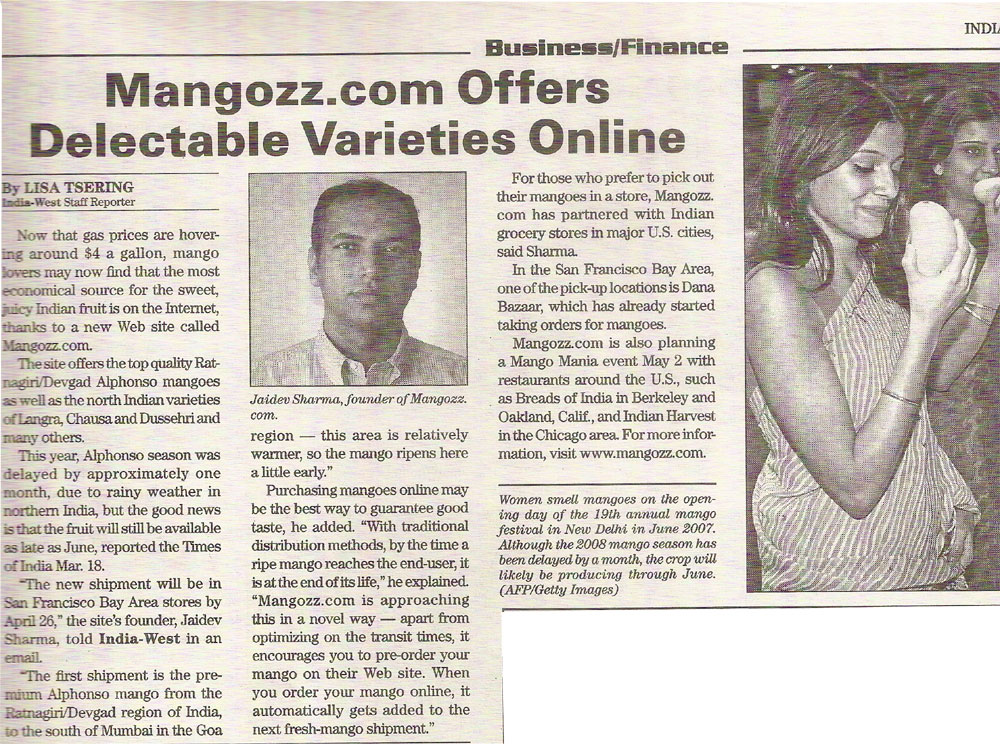 Mangoes at war in US market

Three years after the Indian alphanso landed in the US, the popular chausa from Pakistan has entered America creating a sort of rivalry in the market.

Three years after the Indian alphanso landed in the US to the delight of diehard mango lovers, the popular chausa variety from Pakistan has entered American markets this month, leading to cheers from the fruit’s fans.

Traders involved in its import concede that this brings an element of competition between the mango varieties from two countries, though both are facing the problem of high costs and are presently quite far away from the reach of the masses and are not readily available in Indian and Pakistani grocery stores.

Jaidev Sharma, president of Mangozz.com, one of the largest importers of the fruit from India and Pakistan, says that generally mangoes from India have an edge over those from Pakistan.

After the arrival of the first commercial shipment of about 800 boxes of Pakistani chausa early this month, a box of six “chausa” mangoes was quickly taken at an unbelievable premium price of $ 60-$ 100.

In the last few years, the Indian alphanso has been the costliest variety in the US, with a box (weighing about 3 kgs and containing nine to 12 mangoes) being sold this year at $ 40 to $ 80 in the retail market.

Mango importers from Pakistan hope that as the volume of import of chausa increases in the coming years, they would be able to give a stiff challenge to the mangoes from India.

“We hope to give a tough competition to the Indian mangoes,” said a Pakistani-origin shopkeeper in the Greater Washington Area, who was one of the lucky few to sell from the first commercial consignment.

All eyes are now set on the second commercial consignment of the variety from Pakistan, scheduled to arrive at the Chicago airport – the port of entry for mangoes – on Thursday, which will be taken to the radiation facility in Illinois a day later.

The consignment is being eagerly awaited by traders here as the import of Indian mangoes this season has ended, giving a field day to chausa for carving its place among those who relish the fruit.

American importers of mango from India were left disappointed when the inspector from US Food and Drug Administration (FDA), who processes mangoes at the facility near Nasik and issues certification for their export, left India in the third week of June, even before the peak of the mango season in the northern and eastern parts of the country.

Indian exporters had been apparently told by the USFDA inspector that they could not export varieties of mango other than “alphanso.”

This was immediately brought to the notice of APEDA (Agricultural and Processed Food Export Development Authority) in India and FDA in the US.

By the time the issue to remove restrictions was sorted, the inspector had left the Nasik facility leaving requests from American importers and Indian exporters, that other popular varieties from Uttar Pradesh, Bihar and West Bengal be allowed, to no avail.

Besides alphanso, importers could import the kesar and bangapalli varieties in small quantities.

“Last year we had imported Langra, Chausa and Dussehri Mangoes from India to the US.

But this year, we could not,” Sharma, who is now trying to compensate by ordering the import of Pakistani chausa said.

Eagerly waiting for the arrival of the consignment from Pakistan, Sharma, who has been receiving queries from people across the country, said that there is a lot of demand for mangoes from India and Pakistan.

After year of negotiations, the US had lifted its import restrictions on Pakistani mangoes last year and the first shipment arrived this summer.

While the alphanso variety lasts for about a month in April-May, those from Pakistan are available till September end.

In between is the peak time of other variety of mangoes from India like langra, dussehari, kesar and banganpalli.

“So this gives a wide variety and time range to mango lovers in the US,” Sharma said.